Ganache - how a small mistake became a popular delicacy

For us at Leysieffer, it's quite an everyday term, but sometimes customers ask us: "Ganache - what is that? A cream made of couverture and cream, which we use to fill our truffles. Preparing ganache is an art in itself, which our confectioners have of course mastered excellently and which we would like to give you a little insight into here:

We chop the chocolate couverture (whole milk, dark or white chocolate) into fine pieces, boil up the cream and pour the hot cream over the chocolate so that it is completely covered. Depending on the type of chocolate, we adjust the amount of cream. This is because milk and white chocolate needs more liquid to melt completely.
We leave the whole thing to stand for a few minutes and add spices, coffee powder or alcoholic drinks such as fruit brandies, Marc de Champagne, Cointreau, whisky or rum, depending on what the ganache is to be used for. Then we carefully mix the mixture with a whisk from the middle outwards. Be careful because the cream can curdle if you stir too hard. Gradually a soft, shiny mass is formed.

Not too hard, not too soft

It is important that the ganache has the right consistency. The more couverture it contains, the firmer it is. In the German Food Book for the promotion of canache, as ganache is also called, as a filling for fine baked goods, the composition couverture/cream in a ratio of 1 : 2 is prescribed. However, it is customary to adjust this ratio depending on the intended use. There is another variant of ganache called "Parisian cream". This is softer and has a composition of couverture and cream in equal parts. Once the ganache has reached the optimal consistency for its further use in our house, it is ready to continue.

We let the mass cool down to 30 °C (then it becomes firmer again, so we stir it until it is foamy again). If you still want to add nuts, almonds, shredded coconut or other firmer ingredients, now is the right time. Stir again. Ready to fill or spread.

Arised from a slip-up in a Parisian pastry shop

Like many an ingenious invention or discovery, the ganache is said to have been created by an error. It was around 1850 in the Parisian Pâtisserie Siraudin, when an apprentice confectioner accidentally poured hot milk over chocolate. The master insulted him as "Ganache" (French for fool or donkey). When the result of this mistake turned out to be not so stupid but rather delicious, the new product was added to the range and baptized with the name that was called at its birth. 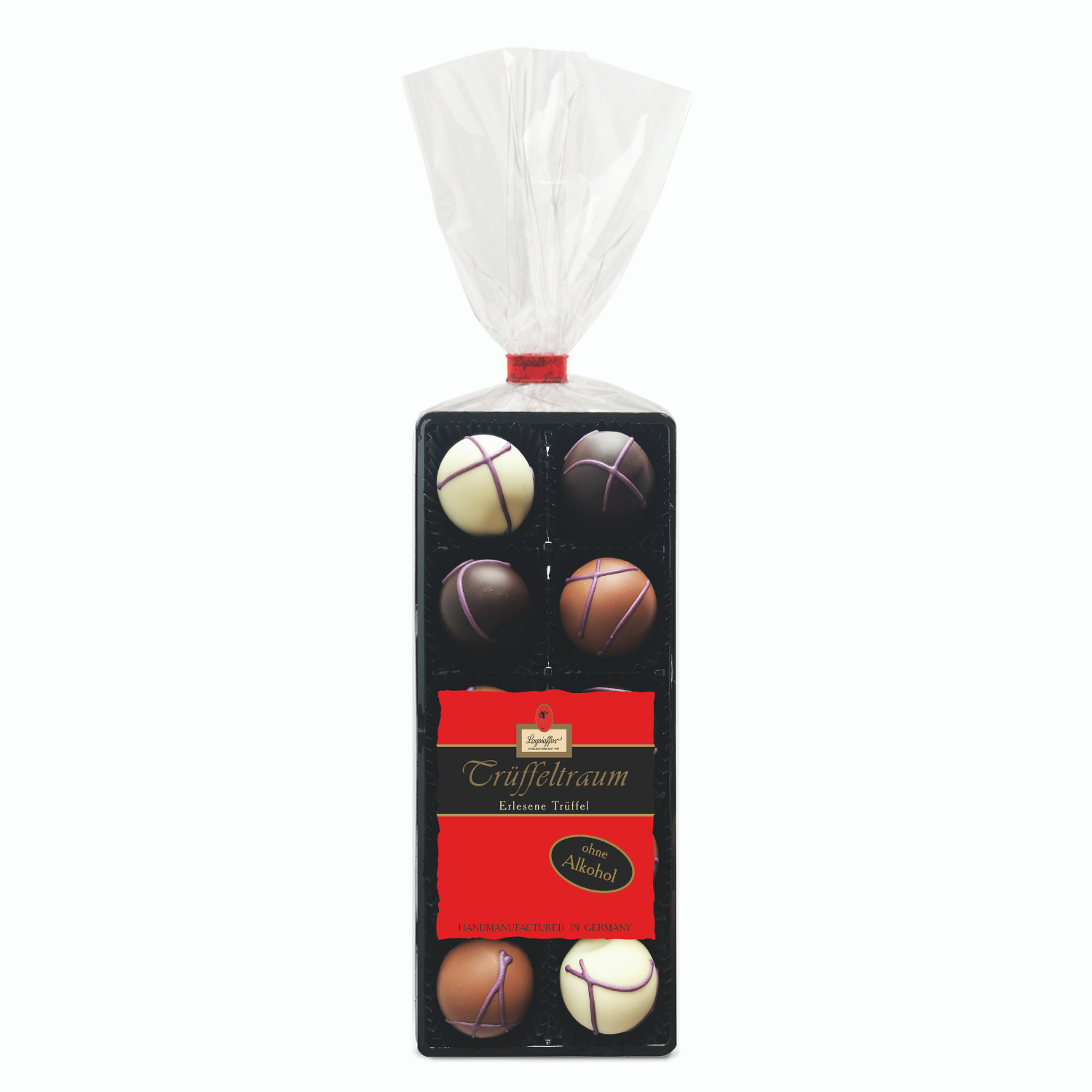 Truffle Dream - Butter Truffle Assortment
These delicious Leysieffer truffles with the fine butter filling are encased in whole milk, semi-sweet and white chocolate, made by hand and lovingly decorated, garnished and packaged. With our handmade truffles, it's easy to make other people happy.